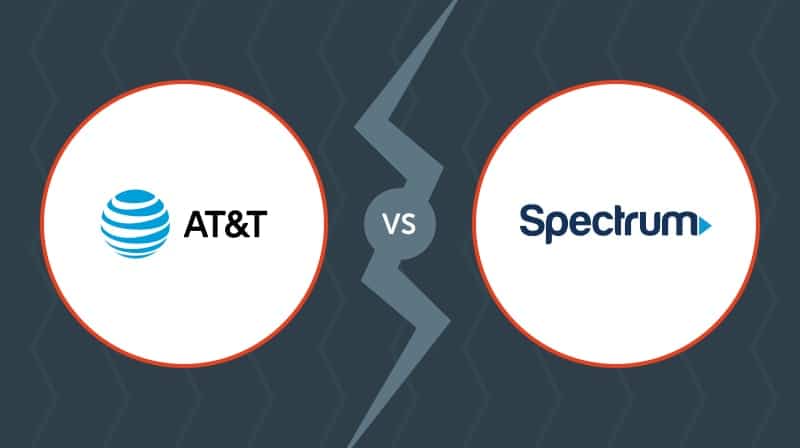 AT&T and Spectrum are two of the most popular names in the Internet industry. While Spectrum Internet is known for serving millions of customers throughout 43 states, AT&T on the other hand, is the biggest telecom company in the world, providing its Internet plans in all 50 states of the country. As both of them are the leading Internet Service Providers (ISPs), most of you might wonder as to which one to choose for your internet requirements. In order to choose between AT&T Internet vs Spectrum, you can go through the information provided below.

Comparison of Spectrum vs AT&T

Spectrum and AT&T both are known for offering excellent services and plans. Both ISPs provide gigabit Internet plans with a speed of 940 Mbps and above, however, the service of AT&T is available in more cities compared to Spectrum.

The basic internet plan of Spectrum begins with 100 Mbps download speed and is widely available in the majority of locations. For most homes, it is an ideal package to have. There are two types of Internet plans offered by AT&T – AT&T internet And Fiber. While the former internet plan is a DSL hybrid, it does not cross the 100 Mbps speed provided by Charter services.

The internet service of Spectrum is transmitted through a cable network, whereas the internet plans of AT&T are comprised of DSL and Fiber optic. Below, you can find the Internet plans of both providers based on speed, price, and availability.

ALSO READ -  Best Cable And Internet Companies Near Me

If we compare the price using the above-mentioned information, it is clear that AT&T Internet plans are cheaper. However, to get the cheapest price, you will need to bundle the services. On the other hand, bundling the services of the Charter’s Internet plan doesn’t lower the price.

If you are looking to subscribe to an Internet-only plan, Spectrum can be a good choice as it offers a decent bargain with ideal speed. On the other hand, if you are looking for a 1000 Mbps download speed, going for the AT&T Gig Internet plan is the best option to choose from. This is not only because of the reasonable price but also because of the availability of the plan.

Moreover, with AT&T requires, a subscriber needs to pay a monthly fee for renting equipment, whereas Spectrum does not charge any extra fee for any such equipment renting, and rather provides a FREE modem with all its Internet plans.

The lowest speed (Internet Assist 30 Mbps) internet plan of Spectrum is faster than that of AT&T Internet 25 plan which offers 25 Mbps speed. However, the fastest speed plans of AT&T are available in more locations to compare to the plans offered by Spectrum.

In brief, both Internet Service Providers have Internet plans with different speeds for almost all types of users. This is the responsibility of the users to figure out what speed they need to meet their internet requirements. While there are different plans offered by both ISPs, what seems to be a bit disappointing about AT&T is that it is known for applying1 TB data capping on most of its Internet plans. On the other hand, Spectrum does not put any such cappings on its plans and all their plans have unlimited data feature. This implies that you can keep on playing HD games, streaming videos, and enjoying other online activities without worrying about losing speed due to data exhaustion.

While the internet plans of AT&T don’t come with any sort of contracts, however, there is an early termination fee charged by them (up to $180)in case you wish to their new service after 30 days. Conversely, the internet plans of Spectrum are provided on a month to month basis. This means that subscribers can easily cancel their plans at any time without worrying about the penalty. Additionally, The provider also comprises a $500 contract buyout offer from your previous internet service provider.

Spectrum is known for offering three TV plans – Select, Silver, and Gold, whereas AT&T is known for providing TV services paired with DirectTV as well as AT&T TV (a streaming service), covering all 50 states.  AT&T has a wider variety of packages.

Quick Comparison of the Primary TV Services of Both Providers

The basic plan of Spectrum (TV Select) is generally for viewers who prefer to enjoy local networks, sports, and lifestyle entertainment. The silver package is mainly for viewers who prefer sports, local, entertainment channels, as well as some premium networks like Showtime& HBO. And the gold package is for those users who like to watch everything starting from local networks, lifestyle, sports, history, entertainment, premium channels, etc.

The Three TV Plans of Spectrum are as follows

The TV plans of AT&T comprise Live TV and on-demand content. The entertainment package from the company features 65+ channels, 3 months subscription to Showtime, Epix, and STARZ, and also top channels such asESPN, HGTV, TNT, and many others. The choice package of AT&T is one of the best-selling packages as it comprises 90+ channels including regional sports networks. In addition to 3 months of Showtime, STARZ, Cinemax, and EPIX, you would also geta subscription to 12 months of HBO.

Similarly, the Xtra package from AT&T is an ideal plan for sports lovers. It comprises more than 120 channels providing everything from the Choice plan and also including 20+ channels like LMN, National Geographic Wild, Gold and more. Also, it comes with 12 months subscriptions to HBO, and 3 months subscription to Showtime, Cinemax, STARZ, and EXPIX.

Both AT&T and Spectrum are known for providing bundle TV and Internet services. If you want you can also add voice services for a complete home entertainment package and save a lot. Below are the most affordable packages offered by both service providers:

When it comes to customer satisfaction, it has been seen that AT&T has a better customer satisfaction rating compared to Spectrum. The prime cause of the low score for Spectrum was the merger between Bright House Network and Time Warner Cable customers which resulted in a lot of billing disputes. However, their modem and installation support services are first-class.

Which One to Go For?

Well, both the service providers are the winner in this Spectrum Vs ATT comparison as both offer similar services to the users to a certain extent. While AT&T is unbeatable for high-speed connections and variety in cable TV channels, Spectrum is appreciated for offering unlimited data, reasonable TV cable plans, and no contracts policy. So, the decision of choosing between AT&T and Spectrum completely depends on the factor that which one meets your requirement in the best way.

So, now as you have ample information about AT&T internet vs Spectrum services, you can easily choose the one matching your requirements better.