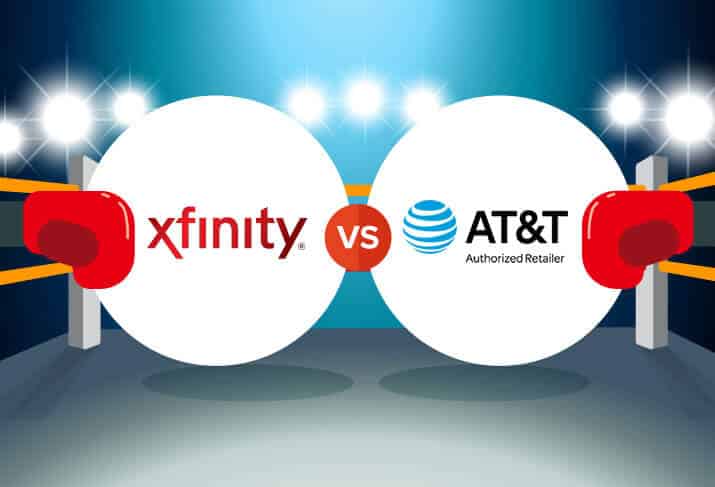 Selecting an Internet Service Provider can be quite troublesome as there are numerous features and plans to compare. If you are confused between AT&T internet vs Comcast internet, the following information may help you decide which ISP to choose and which plan to purchase.

Both AT&T and Comcast Internet are two of the biggest internet service provider in the United States offering a wide range of plans in the majority of cities. If you have the services of both ISPs available for your location, this is how they compare.

Both Comcast and AT&T internet service providers pose a data capping of 1 TB. Though the 1 TB of data capping may seem to be more than sufficient, however, if you have several family members using different devices for streaming videos, playing online games, and other online activities, you may easily get run out of the 1 TB data. But if you have AT&T’s Fiber Internet plan available in your area, you can go for it as it doesn’t come with any sort of data capping.

If you go for a limited data plan (for example 1 TB) from Comcast, you will need to be cautious with the data exhaustion. This is because Comcast will charge you $10 for every 50 GB of extra data consumed after 1 TB of data exhaustion. In case you do not wish to be concerned about passing your limit, you can consider paying an additional $50 per month for an unlimited data plan. The same $10 for every 50GB will be charged by AT&T DSL for going over the limit. Instead of paying extra, you can consider adding $30 per month for an unlimited data allowance if you and your family consumes a lot of data.

As both Internet Service Providers provide DSL plans with speeds up to 100 Mbps and Fiber Optic plan up to 1,000 Mbps (1 Gbps), you may wonder as to how their plans differ.

The 100 Mbps speed internet plan by Xfinity (DSL) is ideal for up to 5 devices simultaneously with light content streaming without any sort of lagging. While the company claims that it doesn’t throttle speeds, however, their customers have reported issues with speed restrictions.

Just Like Xfinity, AT&T also claims that they do not throttle speeds, even though they were recently found by the FTC with $60 Million for doing the same. And through both ISPs are known for offering similar fiber and DSL speeds, the DSL service by Comcast costs $10 less compared to AT&T on monthly basis.

If you are moving to another location and your current ISP is available for the new address as well, you can make a great saving by avoiding early termination charges. Below you can find the information on the AT&T Vs Comcast Coverage.

The residential internet plans of Comcast are available in 41 states. These are:

The residential internet plans of AT&T are available in 21 states. These states include:

The American Customer Satisfaction Index (ACSI) is known for rating internet service providers according to customer satisfaction. As per the scores given by ACSI, it has been found that Comcast has improved a lot in recent years, however, it still needs to go far to reach the customer satisfaction level AT&T. In 2019, Comcast got a score of 61 out of 100. On the other hand, AT&T was given a score of 69 out of 100.

If you wish to use services like Phone, TV, or home security along with the internet, there are bundle options offered by both AT&T and Comcast. Not only do such bundle packages allow you to get all the desired service from one provider but also costs less compared to buying service from different providers.

Some of the most popular packages offered by AT&T and Comcast are provided below. One thing to be noted here is that the promotional prices may apply to these bundles that might increase once the period gets over.

In addition to the above-mentioned packages, there are numerous other bundle packages offered by both AT&T and Comcast. You can contact the desired Service Provider for further information.

So, now as you have ample information on AT&T Vs Comcast internet services, you can easily choose between them to meet your internet requirements.