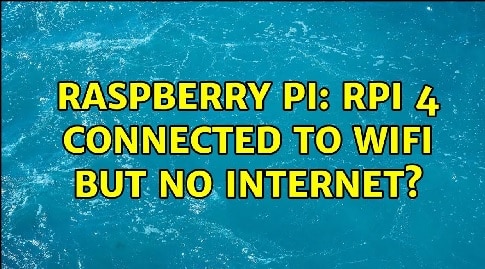 While generally, you will not experience issues with Raspberry Pi in most cases, however, sometimes users may face one or the other problem with it due to different reasons.

One of the most common issues reported by the majority of users with Raspberry Pi is the problem of connecting to the internet. If you ever find your Raspberry Pi connected to WiFi but no internet activity getting carried out, you can consider the different workarounds provided below.

In addition to the above, if your router is capable of supporting both 2.4GHz and 5GHz wireless networks, it is suggested to consider using the 2.4GHz network instead of 5GHz.

Then, you can try again connecting the device to the internet network and see if the problem is fixed or not.

Another workaround that has helped users to fix issues with their Raspberry Pi in respect to the internet is to check the internet for causes. This includes rebooting the router, inspecting the Ethernet port and cable. Below you can find the steps for these workarounds.

If the above-mentioned solutions don’t help you fix the issue with your Raspberry Pi and internet, you can consider reinstalling the Raspberry Pi Image. Here are the steps,

ALSO READ -  Lenovo Laptop Connected to Wi-Fi but No Internet Access – How to Fix?

If your Raspberry Pi detected issues with the SSID or network configured, your device may stop connecting to the WiFi. However, if the problem seems to be with your Ethernet connection, it is most likely that the problem is being caused by a dead Ethernet port.