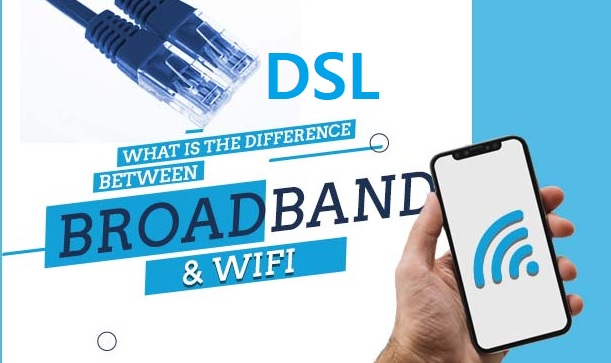 Difference Between Broadband, WiFi, and DSL

Digital Subscriber Line, short for DSL, is a type of broadband Internet connection that makes use of the wires of a telephone network to deliver a high-speed Internet signal to the users’ device. The download speed of DSL can vary from 256 kbps to 24 Mbps. The actual speed in DSL may vary depending on the following conditions:

Generally, the installation of DSL can be done without drilling any extra holes or installing extra outlets, provided your home already has telephone wires installed. If you have everything in line, all you need to do is plug in the DSL modem.

ALSO READ -  What Does DSL Filter Do?

When referring to types of Internet access wireless internet can mean many things. For instance, a wireless network found in a home or office, airport, or coffee shop from a wireless router, which receives its signal from a modem connected to an ISP. On the other hand, Wireless broadband can provide high-speed Internet coverage to a much bigger area and is available in various forms, like 3G, 4G, LTE, satellite, and WiMAX. Although 3G networks are technically considered a wireless connection only, however, they are mainly focused on mobile platforms that don’t require high bandwidth, such as tablets and smartphones.

Now coming to 4G networks such as LTE (Long Term Evolution), and WiMAX (Worldwide Interoperability for Microwave Access), is becoming the standard for wireless broadband. WiMAX and LTE are based on similar technology which covers entire cities and other urban areas with high-speed Internet coverage.

Broadband, WiFi, or DSL Which one to Choose?

When selecting an Internet service, make sure to research your options thoroughly. While you may think that you are within the coverage area for wireless or DSL, however, environmental or location factors can reduce the effectiveness of your connection. For instance, if your DSL connection is at a huge distance from the location of your ISP, the speed of your internet may deteriorate significantly.

This may make you feel cheated as your Internet speeds might not be as fast as claimed by the ISP. Similarly, a wireless connection can also underperform due to interference from trees, local geography or the construction materials used in your home. If your friends or neighbors are using the internet service you are looking to go for, it is recommended to ask them how they feel about the quality of the service offered by that ISP. Also, you can ask your ISP to come to your home and give you a site demo to help you determine whether to opt for wireless or DSL.

So, these are the general difference you will find between Broadband, DSL, and WiFi internet connection.