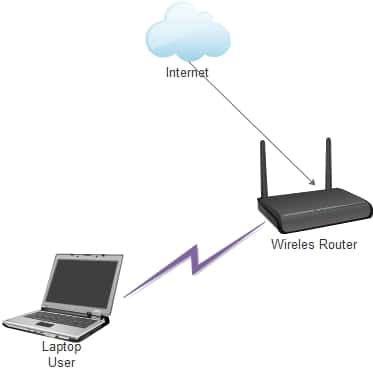 For the majority of netizens, the term Wi-Fi generally means a fancy word for wireless internet. Most people use the term “Wi-Fi” to for their home broadband connection or free Wi-Fi hotspots that allows unlimited access to the internet on the go.

However, it is to be noted that Wi-Fi and the internet are actually two entirely different things. Wi-Fi is basically a type of facility which is known for offering wireless internet access to various devices like computer, tablets, smartphones, and similar other devices, but in within a particular range. On the other hand, the Internet can be considered like a language that is known for allowing one device to send and receive data or information to and from other devices through the Internet Protocol.

Internet is in fact like a massive network of networks that is responsible for linking millions of computers worldwide to allow users with a computer to interact or share information with others users at respective computers. If you wish to know about the difference between WiFi and the Internet in detail, you can refer to the information provided below.

Wi-Fi is one of the most common and easiest ways to connect your computer to the internet without any kind of wire or cable. Technically, Wi-Fi is a wireless networking technology which is known for offering wireless internet access to computer, tablets, smartphones, or other devices within a confined range. The facility to link wirelessly to the internet anywhere allows users to check emails, social networking sites, surf websites, send and receive messages, whenever they wish to. WiFi Hotspot is the term that implies an area where users can have access to unlimited internet through Wi-Fi hotspots. Wi-Fi hotspots come with a specific network name, generally known as SSID, that you can use to connect to the particular hotspot available near you.

Internet is available in almost every part of the world and has gradually become an integral part of almost every life. Internet is basically an interconnected network of computer networks where a user at one computer is able to communicate and share information with a user at another computer.

Although, the Internet emerged as a public communications medium a few decades back, however, it became a sensation over time. ARPA (Advanced Research Projects Agency), the original developer of the internet technology introduced the internet with an idea to create a network to carry out communication between universities. However, technological advances allowed the internet to adapt over time. At present, the Internet is a widely-spanned network of networks across the globe.

Difference Between Wi-Fi and Internet

Wi-Fi is a wireless networking technology which is known for allowing computer, smartphones, and other similar devices with built-in Wi-Fi feature to wirelessly connect to the internet or communicate with each other. Currently, most of the devices are known for supporting Wi-Fi to enjoy unlimited internet access and share network resources on the go.

On the other hand, the Internet is basically a language, a self-sustaining facility that is known for connecting millions of computers worldwide via wireless connections, cables, satellite, telephone lines, etc. It is a network of networks, an interconnected system that is responsible for facilitating information sharing throughout the internet system.

The standard wireless networking technology used in WiFi is known for using radio waves to send and receive signals from nearby devices to offer internet access. It is basically a networking protocol that is known for allowing devices to communicate without any cable connection.

While the term Wi-Fi is often used synonymously with “wireless”, it is considered so in a much broader sense. In contrast, the Internet is a telecommunication network that is known for using the Internet Protocol Suite (TCP/IP) to interconnect devices worldwide. The Internet lets users get access to data or information from other computers throughout the world via the TCP/IP protocol, whereas Wi-Fi is just a platform that allows users to get access to the internet.

While Wi-Fi is known for using radiofrequency waves to send and receive information across a network,however, on Internet, the information is known for passing through the internet using a set of predefined rules controlled by the TCP/IP suite. These protocols are known for offering a common language that both the devices can easily comprehend and use to transfer data.

Wi-Fi can be considered as a router that is capable of carrying internet signals to your mobile devices so that they can communicate with each other over a Wi-Fi network without any need for the internet. Similarly, the internet does not have to be dependent on Wi-Fi to connect computers globally.

This means that you can connect to Wi-Fi but not the internet. Internet is known for connecting millions of computers globally with one network through the World Wide Web, or web.

To summarize everything, it can be said that the internet is an interconnected network of millions and billions of computer networks across the globe which are connected through cables, wireless connections, telephone lines, and satellites – all of these communicate using a single common language known as the Internet Protocol Suite.

ALSO READ -  How to Increase Internet Speed on PS4?

On the other hand, Wi-Fi is just one of the several methods to connect to a wireless network for accessing the internet. It is a wireless networking technology that is known for using radiofrequency waves to carry out communication between nearby devices within a particular range.

In brief, Wi-Fi is just a means to access the internet from your laptop, tablet, smartphone, or any device having a built-in wireless adapter. Although, both the terms are generally considered synonymously by users worldwide, they actually are very different from each other in almost every way.

So, these are the key differences between WiFi and the Internet that you may want to know about.