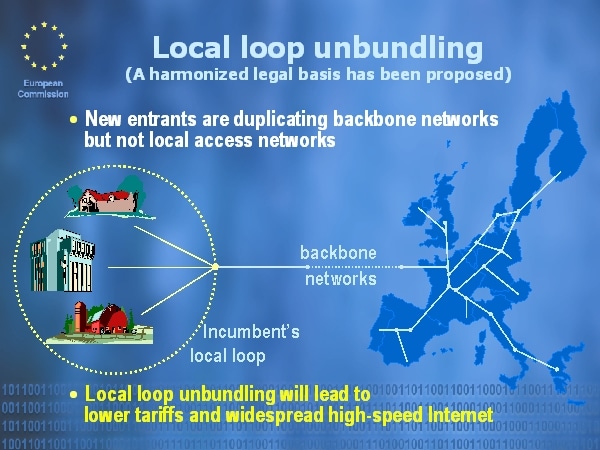 Restoring Internet Freedom Order of 2018 by the Federal Communications Commission laid a framework providing Increased Transparency, strong consumer protection, and elimination of unnecessary regulations. By establishing this order, the FCC wanted to secure the open Internet and offer cheaper, faster Internet access for both households and businesses. In order to facilitate the order, they are looking to revise unbundling and resale requirements currently.

To unlock the competition-starved ISP marketplace, the majority of participants have suggested local loop unbundling. With Local Loop Unbundling, multiple Internet Service Providers (ISPs) are able to share the same wiring in the last mile to users. With competitors sharing the last mile of broadband wiring, it will benefit them by widening the selections of cheaper and faster Internet access.

In simple words, the local loop is a subscriber line, the last mile of cable connecting households and businesses to the larger broadband network.

When for the first time the broadband Internet made its way to the market, some of the top broadband service providers invested in laying the pipeline for establishing the infrastructure for broadband cable, providing cable connection to every household and business–thus enabling the local loop. As the infrastructure was built by these incumbent local exchange carriers (ILECs), they were in control of consumers’ Internet access options.

As the market grew, the demand for high-speed access also expanded significantly to meet the needs of the consumer. Although smaller ISPs had a chance to leverage the opportunity as they were able to build a broadband network that could connect to the larger network, however, they were not having control over the last mile of cable which reached their subscribers.

This incompetence is usually due to the high cost of laying broadband cable lines for every subscriber, which smaller ISPs were not able to spend as much as ILECs were capable of. Moreover, if every ISP would have installed a separate cable line for their subscribers, it would have led to a web of network cables. Having control over the local loop automatically created a monopoly of broadband Internet for the ILECs.

The Local Loop Unbundling framework was introduced by the government to allow multiple service providers to be able to share the same physical infrastructure established by the ILECs. This framework states that:

Full Unbundling is the type of loop unbundling which allows an Internet Service Provider to take complete control of the copper pairs to offer services. This usually comprises voice and video services to their subscribers. In such cases, the Internet Service Provider leases the complete local loop of their subscriber from ILEC. The ownership and maintenance of the unbundled loop are still maintained by ILEC.

While Full Unbundling is considered the ideal option by the ISP, the ILEC can no longer contend for the subscriber. Although the ILEC established the local loop and has the responsibility of maintaining it, it usually charges a lease rate to the Internet Service Provider, making it quite expensive, especially if not managed by the government.

ALSO READ -  AT&T WiFi Connected But Not Working; How to Fix?

The downside with Share Access is that it can lead to technical interface and frequent slowdown. Moreover, the ILEC can also throttle the services of competing for ISP. In such a situation, the ISP needs to frequently monitor its access speeds for its subscribers.

Bitstream Access is another type of loop unbundling which allows the ILEC to have control over the local loop and delegate the appropriate types of services that ISP can offer to the subscriber. As the ISP can only leverage the technology allowed by the ILEC, Bitstream Access reduces the competition between the ISP and ILEC. This is the reason which makes it the least preferred option of unbundling for the Internet Service Provider.

So, these are some of the major things that you would want to know about the local loop unbundling.