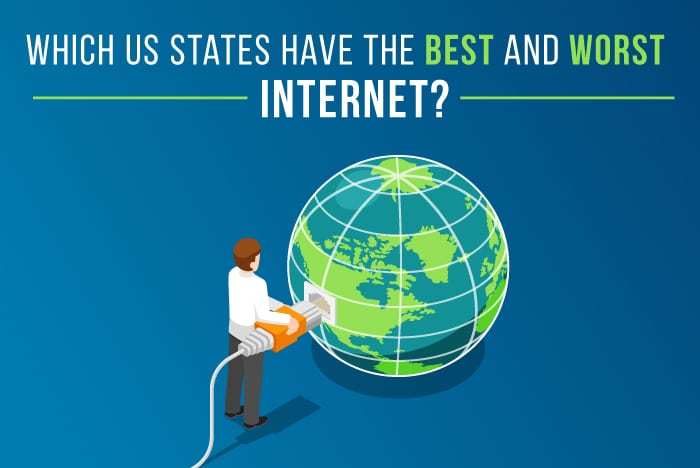 Whether you want to compare the internet speed of your home network with the rest of the states or wish to know it just for gaining knowledge, the following guide provides information on the list of states offering the best internet in the United States. Although, it will not help you improve the performance of your internet at the home or office, below are the states offering the best internet speeds.

You must be quite familiar with the speed of your home internet unless it has only been a couple of days. Generally, you will not bother whether or not you are receiving the internet speed committed by your service provider, especially when you are able to perform the desired task without any lag. However, if ever find your internet to be performing sluggishly, or interrupting frequently, the first thing you will inspect is the internet speed you are receiving.

Although there are numerous online websites offering services of testing download and upload HighSpeedInternet.com, is one of the sites that not only allows users to test their internet speed but also provides information about the various internet service providers (ISPs) and tests internet speeds, compiled over 3 million speed tests throughout the US. With this compiled information, highspeedinternet.com has provided the following state-wise ranking of states with the fastest and slowest internet speed.

NOTE: Before you begin complaining or regretting about the sluggish performance of your home internet in terms of speed even when your state appears to be topping the list, the following data is average. This means that different internet service providers and locations have been combined to provide an overall performance of the state’s internet speed.

ALSO READ -  Increase Internet Speed – How to Speed up My ATT Uverse Internet?

As said above, the following internet speed for each state is displaying the average speed for that particular state; it means that even though your state might be among the top 5, however, the internet service provider for your home internet might be offering erratic service. The high-notch performance of other ISPs in your area might be the reason that your state could be ranking high. If this is the case with your slow internet, consider switching to another ISP.

NOTE: The following information is sourced from highspeedinternet.com

STATES WITH THE LOWEST SPEED

STATES WITH THE FASTEST SPEED

Well, the above-mentioned list displays that Maryland has topped the list for the State with the highest internet speed (for the second time in the row). Delaware and New Jersey have also stood their ground on the list for the past couple of years. The average speeds listed here represent a wide range of places, with the national average coming at 59.5 Mbps in these tests. From the provided information, it can be seen that states with more rural and remote locations have poor internet speed.

To sum up, regardless of the state you are in, any list like the above-one will not help you improve the internet speed that you are getting at home.

ALSO READ -  Not Getting Full Internet Speed Through Router