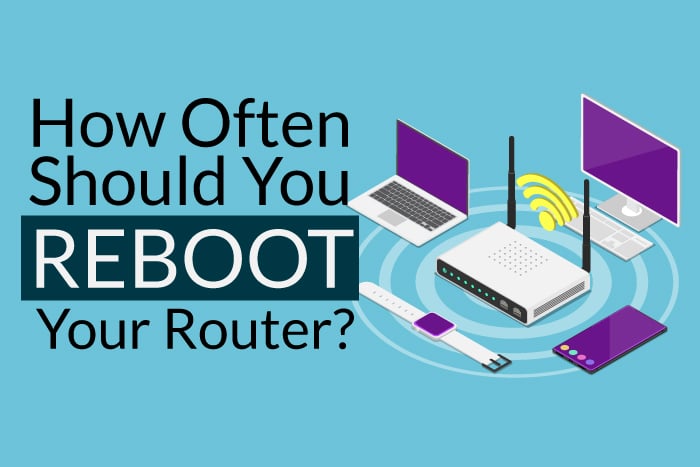 Routers are usually designed to function throughout the day and night to allow users to complete their tasks without any sort of interruptions. While it is recommended to reboot your router regularly for optimum performance, however, some users find it frustrating and only do so when they experience issues with their internet’s functionality. In order to ensure the life and performance of your router, a user must reboot their router at regular intervals. Well, if you are not sure as to how often should you reboot your router, you can go through the information provided below.

While everyone loves the convenience of getting connecting to their Wi-Fi automatically when coming back home, however, it should be remembered that just like computers, routers are powered by a CPU and memory. The more they have to function continuously, the sooner their memory starts to get clogged, resulting in reduced performance. In such a case, a simple reboot is all that your router needs to overcome the lagged performance.

Most of the users find the task of regularly restarting their router a difficult task to remember. Whenever a router is turned off, the security system and other devices that depend on the connection for functioning don’t operate. Considering this fact, you would want to schedule the reboot time.

Some of the signs that can help you know that it’s time to restart your device include weak wireless signals and frequent disconnections. Whenever you face any such situation, consider the following:

Make a habit of rebooting your router twice a month or whenever you experience sluggish performance with your internet.

There are two ways to reboot your router – Soft Reboot and Hard Reboot. While Hard Reboot requires you to disconnect the power from the router physically for a couple of minutes before reconnecting again, on the other hand, Soft Reboot requires you to first log in to the router using the IP address through a browser, navigate to the relevant page, and then press the restart button.

When performing a Soft Reboot, it might cause fluctuations in the power supply to the device and may affect the lifespan of the router. To avoid such an effect on the router, the manufacturer recommends considering the soft reboot option.

Importance of rebooting the router

When you reboot your router at regular intervals, it allows it to have the advantage of gaining faster Internet connections. After a continuous operation, the router reaches a point where it starts performing sluggishly due to the memory log. Generally, an average router comes with 1 GB RAM which is not sufficient for fast download requests. In such a case, a quick reboot is what can help flush away the baggage and offer speedy connections.

Sometimes, restarting the router can also help prevent hackers. As hackers usually attack a system by installing malware, it scans your devices to get access to private information, block network traffic, or make the internet inaccessible. When you reboot your router, it disrupts the functioning of the malicious software.

Difference Between Resetting and Rebooting

Rebooting a router is quite different from resetting your router. Rebooting the router turns it off and on, and restores the previous connections. You will not have to perform any new configuration processes. So, you can reboot your router as many times as you want.

On the other hand, resetting wipes off all the information and brings the device to the default settings. You will need to set up your router again, which comprises configuring a preferred password and renaming your ID. In case both SSID and Password are changed, previously connected devices will need to connect with the internet using the new SSID and Password.