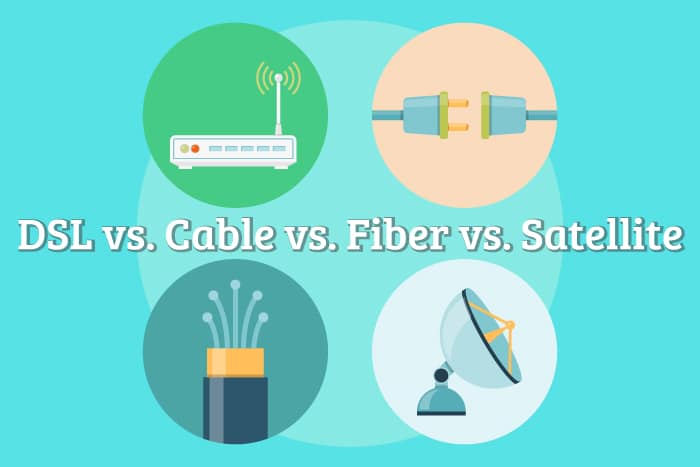 Difference Between DSL vs Cable vs Satellite

While DSL is similar to a dial-up connection, it is known for functioning through conventional telephone lines. However, in contrast to a dial-up connection, a DSL connection is capable of reaching speeds up to 100 Mbps or even more, with better consistency. There two different types of DSL available to the users – ADSL (Asymmetrical DSL) and SDSL (Symmetric DSL). While ADSL is generally a reasonable option, offering faster download speed, however, its upload speeds are not up to the mark. SDSL is a great option for those in need of faster upload speed with equivalent download speed.

Cable Broadband is a type of internet that can be transmitted through the same coaxial wire that also supplies your cable TV. It sends a data signal through your coax cable to the modem at your location. Cable broadband offers download speeds ranging from 3 Mbps to more than 100 Mbps. Almost every cable service provider offers bundled packages of Phone, Internet, and TV.

ALSO READ -  12 Tips To Save Bandwidth While Streaming Videos?

Satellite is another type of broadband internet that offers internet access straight from a satellite to a dish installed in the home or office of a user. The speed of Satellite internet is generally around 3 Mbps for uploading and 15 Mbps for downloading. This internet type doesn’t need cable lines, phone connections, or any other similar medium to transmit the internet.

PROS AND CONS of DSL, CABLE, and SATELLITE INTERNET

While the prime difference between DSL, Cable, and Satellite are provided above, if you wish to have a more reliable and fast internet connection, and pricing is not the factor you are considering, it is recommended to look for fiber optic internet availability in your area. Fiber optic internet is known for offering an impeccable speed of more than 1 Gbps without any sort of throttling. Moreover, you can expect the same speed for uploading and downloading. If you have multiple users at home binging high-quality video streaming or playing high-end games, Fiber optic internet can do the job exceptionally well for you. However, if fiber internet is not available in your vicinity, consider going for the above-mentioned broadband internet types as per your requirement.